The genus Staurophlebia was established by BRAUER (1865, 1866) from his species magnifica from Brazil, a name which later proved to be a synonym of reticulata (Burmeister 1839), (see under this species). In his notes on St. magnifica, HAGEN (1867) said that SELYS (MS) has proposed the genus name Megalaeschna for Aeschna reticulata Burm., Ae. gigas Rbr. (= reticulata), and Ae. gigantula Selys, a closely related new species which was subsequently described by MARTIN. However, Megalaeschna is a synonym of the earlier name Staurophlebia, as already pointed out by COWLEY (1935). In his classification of the aeschnines, SELYS (1883) includes the two subgenera Neuraeschna and Staurophlebia in his genus Staurophlebia s.l., while KIRBY (1890), CALVERT (1905), and MARTIN (1909) give Staurophlebia s.str. generic rank, with St. reticulata Burm. as the genotype. The characters of this genus are as follows: Wing venation: subcosta prolonged beyond the nodus to the first or second postnodal cross vein. Median space free. Triangle long, with 6—8 cells. M2 curved upward proximal to stigma. Rs forked proximal to stigma, enclosing in its fork 3—4 rows of cells; Rspl curved, between Rs and Rspl 5—6 rows of cells at maximum. Anal loop with 12—18 cells. Anal triangle in male 3-celled. Pterostigma small, longer in fore wing than in hind wing. Large (75 mm) to very large (96 mm), stoutly built species, green, brown and blue-coloured. In general, head and thorax light-green, abdomen (except the first two segments) red-brown, bluish green, or dull blue. Frons prominent, marked with T-spot. Eyes connected for a long distance, occipital triangle small. Abdomen long-cylindrical, male with auriculae on segm. 2 and moderately narrowed at segm. 3. Male appendices superiores long, leaf-like, with a hooked middle process on upper side half-way down their length, and an erect denticulate crest at the distal end, along the inner margin. Inferior appendage long-triangular, reaching to 1/3, mostly to 2/3, the length of the superiores. There is a basal prominence of the inferior appendage just between the bases of the app. sup. in the male. App. sup. of the female lanceolate, entire. Abd. segm. 10 of female with a long, two-pronged, ventral process. 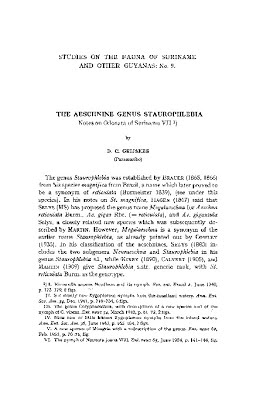