Biology of the Graysby, Epinephelus cruentatus, of the coral reef of Curaçao

Epinephelus (Cephalopholis) cruentatus (Lacépède, 1802) [Petrometopon cruentatum], the Graysby, is one of the most common groupers on the coral reef at the southwest coast of Curaçao. They are very abundant at a depth from 7½ to 9 m. A second, lower maximum in their vertical distribution is found at a depth of 30 m. Juveniles are found mainly at a depth of about 6 m in crevices of the coral species Montastrea annularis. The calculated number of fish actually present appeared to be 24 specimens in a transect of 240 m2 at a depth of 9 m. Measurements were made of the percentage of bottom cover and of the quantity of coral structure. A strong correlation was found between both. For the studied coral reef in Curaçao a high percentage of bottom cover means at the same time a high quantity of structure and thus of hiding places for the Graysbys. A strong correlation (p &lt; 0.01) could be observed between the mean number of E. cruentatus and the mean percentage of bottom cover of the coral species M. annularis and Agaricia spp. These coral species have an important influence upon the vertical distribution of E. cruentatus by their growth form, which supplies hiding possibilities e.g. holes, overhangs, crevices. There is a suggestion of a movement in the population to shallower waters during the spawning season. In Curaçao the Graysbys appear to be diurnal. During the night they move deeper into caves and crevices of the reef. The most important food fish of the Graysby, Chromis multilineata, shows the same vertical distribution as its predator and seems also to be strongly determined by the percentage of cover of M. annularis and Agaricia. Otolith readings of E. cruentatus demonstrate that each year 3 growth rings are formed, the formation of which starts in September, January and June. Juveniles, however, form 7 growth rings a year. The translucent zones in the adults are formed in September, January and June, when food intake, condition factor and body growth is low. In the periods following these three months, the opaque zones are formed and this formation coincides with maxima in food intake, condition factor and body growth. Possibly a change in temperature is a factor in initiating a new growth ring. Growth in length and weight of the Graysbys occurs especially in February and to a lesser extent during July and October. The growth equation of Von Bertalanffy for E. cruentatus in Curaçao is: Lt = 41.5 (1 — e-0.13 (t + 0.94)). The total length-standard length relationship is expressed by the equation: y = 1.2091 x + 0.2326 and appears to be linear. The length-weight relationship found for the Graysbys is: W = 0.0121 x TL 3.0821, and is closely proportional to the cube of the length. The spawning season occurs from May to October. Mating takes place especially in August and September. Mature females are found mainly between 16 and 25 cm TL, at an age of 4 and 5 years, mature males between 21.5 and 27.4 cm TL in age group 6 and to a lesser extent in age groups 5 and 7, transitionals between 19.5 and 23.4 cm in age groups 4 and 5. For the transitionals in the length-range of 19.5-23.4 cm a transition rate of 10% was found. This relatively high rate is linked with a high increase of numbers of males in this length-range. Transition occurs usually in September, and to a lesser extent during July, August and October, immediately after spawning. A sex-ratio of 2.5 : 1 was observed for mature females and males. A significant correlation (p &lt; 0.01) exists between transition rate and sex-ratio. In general a strong dominance of females coincides with a relatively low transition rate and vice versa. Females spawn only once a season, whereas males spawn more frequently and can mate with more than one female. E. cruentatus feeds mainly on fish (75%) and to a lesser extent on crustaceans (18%). Juveniles, however, feed more on shrimps (80%) than on fish. The equation found for the relation mean weight of stomach contents and size classes is: w = 0.00567 x TL3.5917, this indicates that the weight of the stomach contents is a function of about the third power of the length. Graysbys show preference for Chromis multilineata (± 55%). They feed especially at sunrise and sunset. Food intake varies considerably during the year and is in general high between February and August and lower in the rest of the year. In addition, minima in food intake can be observed in January, September, and possibly in June, and maxima in October-November, February-March and July. These minima and maxima in food intake correspond with time of ring formation in the otoliths. A significant correlation was found between food intake and condition factor during the year (p &lt; 0.01). 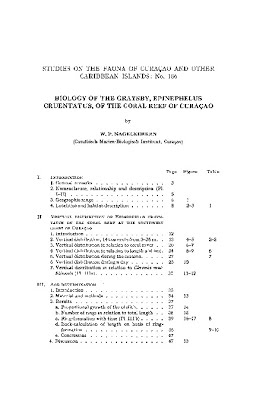