This paper presents a survey of the present situation of Cerion in the Cayman Islands, with reference to the problems revealed by CH. J. MAYNARD’S “Monograph of the genus Strophia”, 1889. This may be of interest to taxonomists who would like to investigate in a “modern way” a species complex in which any “biological species concept” appears to fail. The study is based on material collected in Grand Cayman, Little Cayman and Cayman Brac, from May 16 until June 12, 1973. CLENCH (1964) considers the names of all 14 species described by MAYNARD from Little Cayman and Cayman Brac to be synonyms of Cerion pannosum (Maynard), with the exception of Strophia nana which he accepts as Cerion nanus (Maynard). While agreeing with CLENCH as regards the status of Strophia nana, the author hesitates to lump together all MAYNARDS other species but considers that at least two variable and intergrading groups of Cerion (= Strophia) should be distinguished: C. pannosum, common to western Little Cayman, and C. copium, common in eastern Little Cayman and in Cayman Brac. An impression of the taxonomic complexity of Cerion on the Cayman Islands may be gained by consulting the section in which all 95 localities (Grand Cayman 35, Little Cayman 21 and Cayman Brac 39) are briefly described, with reference to numerous measurements (Tables 2-4), maps and graphs (Figs. 8-22), and photographs of localities (Pls. I—VIII) and specimens (Pls. X-XVIII). The cerions of Grand Cayman – which island was not visited by MAYNARD – have generally been considered to belong to one and the same species, Cerion martinianum (Küster). Living populations were observed at a few places only. No distinct geographical speciation was found. In the western part of Little Cayman flourishing coarsely striated large Cerion pannosum was found, commonly mixed with smooth or almost smooth specimens. Along the northern coast C. pannosum merges into C. copium, common in the eastern part of the island, while a distinct boundary between both species was observed on the southwest coast, east of Blossom Village. Several old shells outside the area of living C. pannosum suggest the species having had a more extended range in former days. Cerion nanus (Maynard) – which was not collected by the author – may be expected to be still living in the central part of the West End. The author had no dfficulty following PILSBRY (1949) in accepting Cerion copium as the only recent species of Cayman Brac, except when dealing with some closely ribbed and uniformly brown specimens from The Bluff along the northern shore, which were indicated as bluff-type. Similar specimens were observed by PILSBRY when studying the material collected by C. BERNARD LEWIS in 1940. Small-sized copiums were especially common near the southwest coast at Knob Hill, while at several places medium-sized animals with coarse and distant ribs occurred. A few old shells resembling C. pannosum contributed to the heterogenity of Cayman Brac’s malacofauna. A rather strange element was revealed by the discovery of some small, minutely striated subrecent shells near the northcoast, which are described as a new species, Cerion caymanicolum, awaiting a further analysis of the Cayman Islands’ Cerion fauna. The paper concludes by giving a Synopsis of Cerion in the Cayman Islands, followed by some notes on C. martinianum, C. nanus, C. pannosum, C. copium and C. caymanicolum. From this (Table 5) it may be obvious that – the author has no doubt that C. nanus is markedly different from all other Cayman Islands cerions; – the rationale (beyond geography) for distinguishing the Grand Cayman forms as a separate species is less convincing, as several small specimens of C. martinianum don’t look very different from some dwarfed forms from the other islands; – the species C. pannosum and C. copium are separated not for practical reasons only, but also because of field evidence; – the specimens of C. caymanicolum are considered to belong to a new species because of their deviating characteristics and peculiar occurrence, though some likeness with dwarfed C. martinianum and C. copium cannot be denied. 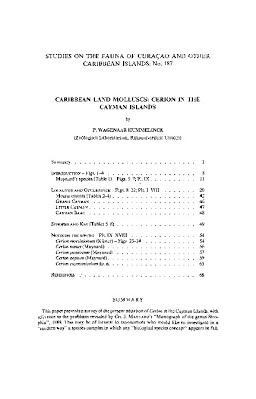