A new species of the Rodent Baiomys from Aruba and Curaçao

In his paper on the mammals of the islands of Aruba, Curaçao, and Bonaire (situated off the north coast of Venezuela), WAGENAAR HUMMELINCK (1940 a, p. 69) mentioned a juvenile specimen of a cricetine rodent which was identified by Mr. M. A. C. HINTON and Mr. R. W. HAYMAN as probably belonging to the genus Hesperomys. In his zoogeographical remarks on the mammalian fauna of the islands, WAGENAAR HUMMELINCK (1940 b, p. 111) noted: “It is doubtful what significance may be attached to the occurrence of the small Cricetine Hesperomys? (launcha aff.) on Aruba, since this genus is southern in range, none being found in northern South America”. This statement is, indeed, in accordance with the statement by ELLERMAN (1941, p. 446), who mentioned that Hesperomys occurs in Peru, Bolivia, Paraguay, Uruguay, S.E. Brazil, and central and northern Argentina (see also GYLDENSTOLPE, 1932, p. 72—76). Unfortunately the above-mentioned juvenile specimen, which was collected at Vader Piet, near Fontein, Aruba, on February 9, 1937, must be considered lost, since it could not be found either in the collections of the British Museum (Natural History), London, or in the Zoological Museum, Amsterdam, or in the Leiden Museum. However, a re-examination of all rodents collected in the Netherlands West Indian Islands from 1930 to the present day by Dr. P. WAGENAAR HUMMELINCK and others shows that, in these islands, a cricetine rodent does actually occur, which, in my opinion, is more closely allied to the genus Baiomys than to Hesperomys. The characters of this rodent differ to such an extent from the described forms of the genus Baiomys, which ranges from Texas and Arizona through Mexico to west-central Nicaragua, that it is described here as a new species. 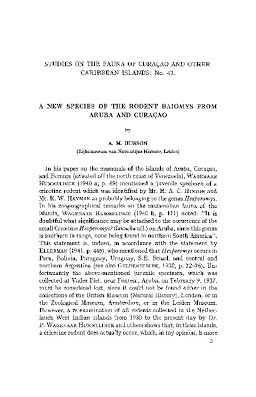