On the ecology of Coenobita clypeatus in Curaçao with reference to reproduction, water economy and osmoregulation in terrestrial hermit crabs

1. This paper deals with various aspects of the life-history, ecology, water management and osmoregulation of the West-Indian land hermit crab Coenobita clypeatus (Herbst) in Curaçao, Netherlands Antilles. 2. Land hermit crabs belonging to the family Coenobitidae may be considered as one of the most terrestrial forms of decapods. They are characteristic for tropical coasts and islands. Though C. clypeatus may be found in a variety of habitats they show a preference for areas with a relatively dry climate. In this respect habitats as found on the Leeward Group of the Lesser Antilles are representative for the species’ occurrence. In addition to populations of animals living on the coast, the ‘coastal animals,’ there are also individuals living in the interior, the ‘inland animals.’ The latter generally are older specimens, living in well-fitting and undamaged Livona-shells, and able to settle and maintain themselves in habitats rich in food, where there is a supply of fresh or brackish water. Though these animals still maintain a close bond with the sea, they may be said to have reached a more advanced stage of terrestrial life. The greater part of the research was carried out with inland animals. 3. In July reproductive migration starts, adult and not yet fully grown animals migrating towards a restricted number of spawning places on the southern coast, probably following traditional pathways. These places are characterized by the presence of good shelter, suitable drinking water and a quiet and accessible coast. Usually animals of roughly the same size gather in separate groups. It is assumed that fertilization occurs here. Soon afterwards, usually around the time of full moon, the first ovigerous females may be observed. Under the circumstances prevailing on Curaçao, the fresh red-brown eggs develop in about three weeks. The eggs then contain a full-grown larva, in the first zoea stage, which is liberated as soon as the egg is brought into the sea. In a number of consecutive nights the females deposit clusters of ripe eggs at the low water line, from which clusters the larvae are carried away by the rising tide. Apart from females with fully developed eggs another, second, wave of animals with freshly laid eggs may be observed, to be followed in some cases by a third wave. In this way groups of larvae in consecutive cycles, are brought to the sea throughout the summer season. The reproductive period lasts from July to about November on the Leeward Group of the Lesser Antilles. A striking feature is the difference in sex ratio between younger and older animals, the relative number of females decreasing with increasing age. 4. Land hermit crabs are frequently exposed to strong evaporation, therefore a good water management is of primary importance. There are many factors contributing to this maintenance, such as adaptations in anatomy, way of life and behaviour, the powers of detection and uptake of water, the mainly nocturnal life, the possession of a shell which can be closed, the shell water, the urge to seek a suitable micro-habitat, etc. Under constant environmental conditions dehydration always proceeds along the same lines in the same animal. At a temperature of 28°C and a relative air humidity of about 75%, which for Curaçao are the normal conditions, average survival was 8 days, together with water losses of maximally 30% of the initial amount of body water. Dehydration always entails an increase in osmotic value of the body fluids; uptake of water makes the concentration decrease again. 5. In favourable conditions Coenobita clypeatus actively stores a great amount of water as shell water. By applying salt accumulation, washing, mixing or dilution, in relation to the salinity of the available drinking water, the animal effects a rough regulation, in which the shell water is kept more or less constantly at a salinity fluctuating around 32-33‰ S, which is slightly below the value of normal sea water (= 36‰ S). As a rule small animals maintain a slightly higher concentration of shell water than large animals. Air humidity also influences the concentration of shell water in such a way that in a period of drought shell water of a slightly lower concentration is stored. Generally speaking the time factor has a stabilizing influence on the concentration. When in an experiment drinking water of various concentrations is offered, there is a tendency to take up water of ever decreasing salinities, while the total amounts are decreasing too. 6. Osmoregulation fails in land hermit crabs that do not possess an external environment of water. Due to evaporation and consequently dehydration of the animal the osmoconcentration may reach very extreme, lethal heights, equivalent to over 60‰ S. Dehydrating hermit crabs may be compared to osmoconformers. If, however, such an external environment is actually present, Coenobita proves to be a fairly good regulator, trying to keep its body fluid as constant as possible, both in hypotonic and hypertonic media. Generally the role of the external environment is played by the shell water, which serves as an intermediate environment between the available water and the internal medium. As this shell water is already regulated, the osmoregulation proper must be considered as superimposed on that of the shell water. An optimal value for osmoconcentration of the body fluid approaches an equivalent of 34-35‰ S. Non-electrolytes contribute greatly — up to 30% – to the total concentration. Osmoregulation however is mainly brought about by regulation of the electrolytes. 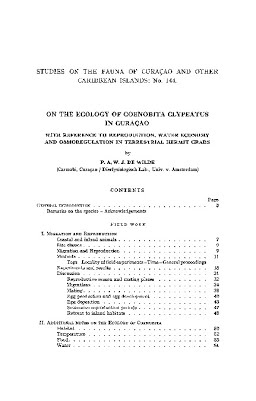