The eastern end of the Greater Antilles between the Mona and the Anegada passages is composed of isolated Mona in the former passage, Puerto Rico (including its satellite islets), Vieques, Culebra, and the Virgin Islands. The major islands of the Virgins are St. Croix, St. Thomas, St. John, Tortola, Jost van Dyke, Virgin Gorda, and Anegada; there are as well a multitude of smaller islands, islets, and rocks. Of the Virgin Islands, St. Croix to the south is separated from the Virgin Bank, whereas the balance of the Virgins (except Anegada) are separated from one another by narrow and relatively shallow channels. From this entire region have been described six forms of the Antillean snake genus Alsophis. The purpose of the present paper is to define these forms and delimit their ranges more closely than heretofore, and to comment upon the interrelationships between them. Since Alsophis is either extremely rare or extinct on many of the larger Virgin Islands, and is likewise not exceptionally common on Puerto Rico itself, the present study could not have been undertaken without the complete cooperation of the following curators, who have loaned specimens for study: CHARLES M. BOGERT and GRACE M. TILGER, American Museum of Natural History (AMNH); JAMES BÖHLKE and EDMOND V. MALNATE, Academy of Natural Sciences of Philadelphia (ANSP); ALICE G. C. GRANDISON, British Museum (Natural History) (BMNH); NEIL D. RICHMOND, Carnegie Museum (CM); WILLIAM E. DUELLMAN, Museum of Natural History, University of Kansas (KU); ERNEST E. WILLIAMS, Museum of Comparative Zoology, Harvard University (MCZ); CHARLES F. WALKER and GEORGE R. ZUG, Museum of Zoology, University of Michigan (UMMZ); DORIS M. COCHRAN and JAMES A. PETERS, United States National Museum (USNM). Specimens in my own collection are designated Albert Schwartz Field Series (ASFS); I have also utilized specimens in the collections of RICHARD THOMAS (RT) and DENNIS R. PAULSON (DRP). For the assembling of Alsophis from the area under study I wish to acknowledge the capable assistance of GERALD D. GAGNON, RONALD F. KLINIKOWSKI, DAVID C. LEBER, and RICHARD THOMAS. The illustrations for the present paper have been executed by Mr. KLINIKOWSKI and he has my gratitude for this task. 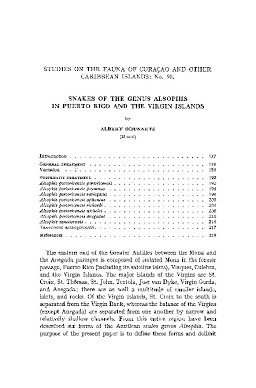