Experiments in connection with Salt Domes

The different theories concerning the origin of Salt Domes in Roumania, Germany, Texas, Louisiana, Colorado and Utah are discussed. In Roumania the salt occurs in cores of “Diapir” anticlines. The existance of hills of salt indicates, that the salt is still pushing upwards. In Germany the salt district shows slight folding but the salt itself is intensively folded. The theory of Lachmann-Arrhenius-Harbort explains the salt domes by isostasy combined with a lower specific gravity and greater plasticity of the salt than of the covering layers. This theory is opposed by Stille, who accounts for the salt domes by mesozoic folding. The latter theory has apparently gained preference in America for the explanation of the Salt Domes in Texas and Louisiana, although no indications of folding are met with there. Two series of experiments were carried out. Those of the first series were made to determine the form in three dimensions of the intricate folding, observed in the German salt mines and of which the folds round vertical axes in particular are very remarkable. Further it was the aim to find out if, by making use of forces, which may be compared to isostasy, similar folds could be artificially produced. When using layers of identical plasticity, regular congruous folds occurred (exp. I, 1). When layers of different plasticity alternated with eachother, smaller complicated, dis-harmonious folds arose, superimposed upon larger ones, corresponding to those of the preceeding experiment (exp. I, 2—7). It is important to note that in the field of vertical pressure, by difference in the viscosity between plastic and less plastic material, fissures were torn in the less plastic material, at right angles to the direction of movement, which were filled up by the plastic material. Similar rents may be expected in the salt fields. The experiments of the 2d series were made with a counter pressure equal to half the initial pressure per surface unit. The reason for making these experiments was that in the first series air-spaces occured. In nature, also, a considerable counter-pressure exists, during the rising of the salt in consequence of the weight of the covering layers. Remarkable folds were formed, which, in material of identical plasticity, showed an M-form in vertical section (exp. 1, series II). Exp. 6, series II showed that with a thick series of layers the top layers may begin to move before the lower ones. In this way two M-shapes originated one above the other. Exp. 3 and 4 were made with white paraffin of uniform melting point in which were placed a horizontal row of vertical pillars divided into layers, so as to be able to reconstruct the stream lines of the paraffin. Here the friction between the paraffin and the iron walls of the compression apparatus were seen to exercise an important influence upon the movement of the paraffin. The principle result of the experiments is that all shapes of folds, observed in the German salt domes, can be completely explained by Lachmann’s theory, that is by the isostatic pressing up of the specifically lighter salt in pillar-like masses. This alone, however, does not exclude the possibility that tangential pressure may be partially or entirely responsible for the known phenomena. The senior author gave a lecture on the first series of experiments at Bâle on September 3, 1927, at a meeting of the Mineralogical section of the Schweiz. Naturforschende Gesellschaft (bibl. 19) and at Delft in the annual meeting of the geological section of the Geol. Mijnbouwkundig Genootschap voor Nederland en Koloniën in March 1928. 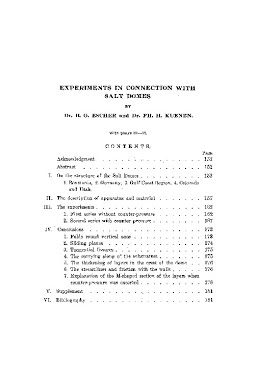