The northern part of the contact aureole of the biotite-granite of Quérigut contains limestones and dolomites, which have been metamorphosed over a distance of about 100 to 150 metres. Further, a wide innermost border zone of the igneous body is characterized by the development of some hornblende and the occurrence of many dark inclusions, as well as aplitic and porphyritic dikes. A narrow outermost border zone of the granite is conspicuous by a much larger proportion of hornblende and accessories, the development of clinopyroxene in the immediate vicinity of the contact, and finally by a heterogeneous texture. Scarce localities where comparatively fresh granite is in direct contact with the dolomitic country rock, revealed the presence of a narrow zone of silicate skarn, developed exactly at the junction. Adjoining the skarn, the granite of the outermost border zone shows a very narrow and highly modified border facies over a distance of a few mm. to 5 cm., the so-called transition zone. Three types of this zone are distinguished: a prehnite-rich type, a clinozoisite- and zoisite-rich type and a grossularbearing one. Though the contact is very irregular, the zone of the silicate skarns follows all its curves and is remarkably constant in width (4—7 cm.). The adjoining country rock being almost pure dolomitic marble, the zone of the silicate skarns has apparently been formed by extensive metasomatism over a very limited distance. Within the skarn zone itself, a zonal structure is also apparent, with six different mineral assemblages, the spinel-xanthophyllite zone being the most conspicuous. Since the skarn consists mainly of a diopsidic clinopyroxene, it is broadly speaking a silicated dolomite. According to the mineralogical composition of the different zones, however, a certain amount of iron and aluminium has also been introduced by diffusion from the adjacent granitic magma, the proportion of both elements diminishing towards the marble. Among the various earlier and later minerals observed in the skarns, a thulite-like clinozoisite, amesite and diaspore may also be mentioned. Alternating layers of pure and impure limestones and dolomites, making up the bulk of the country rock, have been subjected to thermal metamorphism and partly also to pneumatolytic action. The pure limestones and dolomites were recrystallized to pure marbles. Impure limestones were transformed into calcite marbles with varying proportion of contact minerals, such as clinozoisite-epidote, prehnite, diopside, grossular, idocrase and wollastonite. Pure and impure quartzitic layers and lenses intercalated between the earlier limestones are now calc-silicate hornfelses, composed mainly of the minerals just mentioned. The impure dolomites were converted into dolomitic marbles with magnesium-rich minerals such as forsterite, phlogopite and spinel, while pneumatolytic action superimposed on the thermal metamorphism partly transformed the forsterite into clinohumite. Besides these four widespread minerals, chondrodite, humite and fluoborite have been found locally. Some of the spinels display two different colours within the same crystal. All steps in the progressive alteration of spinel into hydrotalcite are visible. Of the more than sixty minerals encountered in the rocks of the contact aureole and the border zone of the granite (listed on p. 255), six are probably new for France, viz. amesite, fluoborite, hydrotalcite, manasseite, xanthophyllite and a thulite-like clinozoisite. The alteration phenomena of some of the earlier minerals are of special interest and we may mention here that of spinel into diaspore, hydrotalcite and two types of amesite; of xanthophyllite into a. o. amesite, prehnite and clinozoisite; and finally of biotite into a. o. pumpellyite and garnet. Comparative studies of rocks from several other areas revealed similar alteration phenomena. The secondary garnet of a peculiar, flat, lenticular shape is probably of hydrothermal origin and appears to be a quite common mineral which has apparently hitherto been confused with other minerals such as zoisite. Finally, two new localities of clintonite have been found, one in Spain (Serranía de Ronda) and the other in the U.S.A. (Franklin). 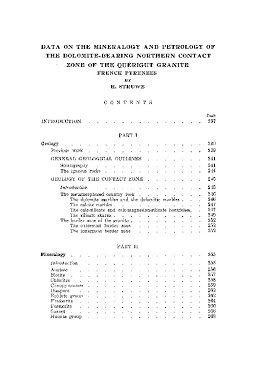