This study of the calcareous algae in the limestone deposits of the two formations (San Emiliano and Lois-Ciguera) in NW Spain is based on field observations and microscopical study. It was possible in the field to divide almost all the limestone members into smaller units on the basis of physical, chemical and biological composition of the rocks. After studying the organic content of the rocks, it appeared that there was a close connection between their lithological and biological composition. With these aspects known, it became a fact that units with a given composition alternated in a regular sequence. This offered the possibility of recognising a cyclical sedimentation within a single limestone member. Considering the special properties of the cyclical sedimentation, such as the fact that it is only found in CaCO3 containing layers and the small size of the cycles, the name minor cycle has been suggested for such deposits. Two facies types can be distinguished: (1) originating in a quiet milieu, and (2) facies originating in a disturbed milieu (these were called limestone facies type A and limestone facies type B, respectively). It is typical of the limestones which were deposited in facies type A, that, amongst other properties, they have very little terrigenous material in their matrix, while those of facies type B contain large quantities in their matrix. A mixture between the two facies types was also observed and called facies type AB. The microscopical study was aimed to investigate: 1. the characteristics of the limestone construction, 2. the quantitative composition of the fauna and flora over the whole area; in a member in a minor cycle, and in a bed, 3. certain environmental changes, which affected the composition of the organic material. A detailed study has shown that two types of limestone are present, with respect to origin, manner of accumulation, and texture. These are skeletal and fragmental limestones. The skeletal limestones can occur as reefs and as banks. Proportionately, there are as many banks as fragmental limestones, and fewer reef limestones. It became clear, from the quantitative analysis, that the algae were by far the most important rock builders. Brachiopods, Foraminifera, corals, and gastropods also form a considerable fraction. There are fewer bryozoans, trilobites and ostracods present in detectable numbers. In the qualitative analysis, various associations of organisms were found, which must be considered as constant associations. It has thus been established that associations of, gastropods with red algae (mainly specimens of the genus Archaeolithophyllum), brachiopods with bryozoans and echinoderms, corals with blue green algae, Foraminifera with algae and echinoderms, are often found. On the other hand, gastropods are found with brachiopods and bryozoans, Foraminifera with brachiopods and bryozoans, and calcareous algae with brachiopods and bryozoans, can be considered as less frequent associations. An exception is the association of brachiopods with gastropods and red algae, in oolitic beds. These elements, however, lived in a special environment and this resulted in an exceptional composition of dwarf elements. Sometimes, clear changes could be seen in the composition of the flora and fauna within a bed. These changes can be qualitative and quantitative. It is noticeable, in most echinoderm beds, that the percentage of brachiopod fragments increases from the bottom to the top. The composition of other beds also shows such changes with other types of organic remains. The algal beds can generally be divided into three parts, on the basis of their biofraction composition. This can be explained by changes in one or more of the environmental components. Until now, no attention has been paid to a study of the rich algal flora in the Carboniferous deposits of NW Spain. 21 genera (4 new) and 26 species (15 new ones) have now been described. There are 8 species (7 genera) of red algae, 15 species (11 genera) of green algae, and 3 species of blue-green algae. The systematic position of the red algae, which are found in the area, has not yet been fully determined, thus two newly described genera Amorfia and Pseudokomia have been placed in the first group — according to Johnson's usage the ”Red algae of uncertain affinities”, together with the genera Cuneiphycus, Komia, Archaeolithophyllum, Petschoria, and Ungdarella. Three new species of red algae are described: Archaeolithophyllum johnsoni, Amorfia jalinki, and Pseudokomia cansecoensis. The largest proportion of the green algae belong to the family Dasycladaceae, 11 species (8 genera) are described in the present work, nine of these being new. These are Beresella hermineae, Epimastopora bodoniensis, Epimastopora rolloensis, Epimastopora sp., Macroporella ginkeli, Mellporella beundermani, Mellporella anthracoporella – formis, Uraloporella sieswerdai, and Zaporella cantabriensis. The new genera are Mellporella and Zaporella. 4 new species of the family Codiacea are described (3 genera), 3 of these species are new: Donezella lunaensis, Eugonophyllum mulderi, and Ortonella myrae. Strong arguments, on the basis of algal body construction, were found for placing the new species, Donezella lunaensis, in the family Codiaceae. The blue-green algae could not be specifically determined because of their generally poorly preserved structures. Of these, Girvanella sp., Osagia sp., and Pycnostroma sp., were described. 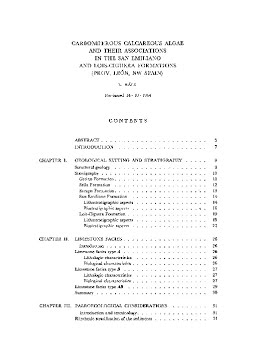