Petrology of an aegirine-riebeckite gneiss-bearing part of the Hesperian massif: The Galiñeiro and surrounding areas, Vigo, Spain

The investigated area forms part of the crystalline basement of the southwestern half of the Iberian peninsula (Hesperian Massif). In it, Precambrian paragneisses of predominantly greywacke composition surround granite-gneisses with whole-rock Rb-Sr ages of 486-500 m.y. Hercynian granites are intrusive into the older rocks. It is argued that the paragneisses underwent a Barrovian type regional metamorphism (probably low P-T portion of the almandine-amphibolite facies) in the Precambrian, were locally thermometamorphosed by some types of the Cambro-Ordovician granite complex, while in the hercynian orogeny they were again subjected to regional metamorphism, but now of the Abukuma-type (andalusite-cordierite-muscovite subfacies of cordierite-amphibolite facies). The Precambrian metamorphism is represented by elongated quartz, biotite flakes and relics of garnet, all enclosed within early-hercynian minerals, the thermometamorphism by altered, fine-grained cordierite and by fine-grained rock structures, the hercynian metamorphism by the occurrence of cordierite, andalusite and cummingtonite, in appropriately composed rocks, on a regional scale. The granite-gneiss complex consists of per-alkaline gneiss (containing quartz, albite, microcline, riebeckite, aegirine, lepidomelane, astrophyllite, zircon, fluorite, xenotime, pyrochlore and some less frequent accessories), biotite gneiss (composed of quartz, microcline, plagioclase, biotite, occasionally muscovite or green amphibole, accessories) and a hybrid series of basic rocks both enclosed within and assimilated by alkaline granite-gneiss. Evidence is presented in support of the hypothesis that the per-alkaline gneisses were onefeldspar granites before their (hercynian) gneissification, which caused separation of the perthites into very pure albite and microcline, both in the maximum low-temperature state and that riebeckite in its present composition was not an original constituent of the per-alkaline granite either. Considerations on the stability of riebeckite, aegirine and lepidomelane yield P-T conditions compatible with those deduced from the paragneiss mineral assemblage. Sodium, apparently mobile after the separation of the perthites into their composing minerals, migrated into neighbouring rocks, causing the formation of albite porphyroblasts. The influence of prehercynian alkali metasomatism from per-alkaline granite is also locally visible. The hercynian megacrystal, muscovite, two-mica and coarse-grained biotite granites and cordierite-quartzdiorite are petrographically described and their origin and mode of emplacement discussed. Chemical analyses were made of paragneiss, metasomatosed paragneiss, per-alkaline gneiss, amphibolites, rocks of the hybrid series and of microcline, riebeckite, aegirine and lepidomelane. Optical data of albite, microcline, riebeckite, aegirine, lepidomelane and cummingtonite and X-ray data of albite, microcline, riebeckite and aegirine are given. Of microcline and riebeckite the cell parameters were calculated. 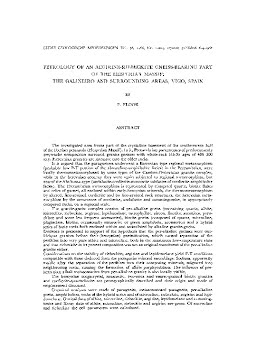