Morphological observations with systematic implications on some palaeozoic Rhynchonellida from Europe, with special emphasis on the Uncinulidae

It is the aim of this publication to discuss some important morphological features of some Palaeozoic Rhynchonellida. Material has been investigated from Spain (Cantabrian Mountains), Czechoslovakia (mainly from the Barrandium), Germany (Eifel) France, Belgium and Gotland. Attention has been focused on the Uncinulidae, but representatives of other, related families have also been studied. Many of the given descriptions and interpretations can also be applied to other groups of Brachiopoda. A great number of the obtained data are used in a reconstruction of the phylogenetical tree of the Uncinulidae at the end of this publication. Using this some suggestions are made for a new classification of this family. The following topics are treated. Chapter II. Microscopic shell structure. The shape and course of the fibres in the secondary shell layer and the shell mosaics on the inner shell surface have been given special attention. According to Williams (1956, 1965, 1966) each fibre has been secreted by one outer epithelial cell (fig. 11). Proceeding from this observation an attempt is made to reconstruct the movements and modifications in the outer epithelium during the formation of the shell (e.g. fig. 35, 36). In many instances these movements turn out to be unexpectedly complicated, but in general a certain regularity in the pattern can be discerned (fig. 21, Pl. IV, V, VII). In some cases these movements are demonstrated to be determined to a certain extent by increases and reductions in the size of the epithelial cells in certain areas of the shell (fig. 24, 28, 29, e.g.). An appropriate terminology is developed to describe and interpret the phenomena in question. The course, size and shape of the fibres are found to be very useful features in brachiopod systematics. Chapter III. Marginal spines. The serial zigzag deflections in the commissures of young shells of most uncinulid species are known to convert at a certain growth stage into a combination of reduced zigzag deflections and a corresponding set of marginal spines. A morphological range can be framed from species with a well developed zigzag deflection and without marginal spines (e.g. Estonirhynchia estonica) to species with well developed marginal spines in combination with a completely rectimarginate commissure (e.g. Kransia parallelepipeda). Between these two extremes many transitions occur (cf. fig. 43, 44, 45, 46, 47). With the exception of a few species this morphological range appears to be in line with the succession of these fossils in time, so that it probably reflects a phylogenetical development. An attempt is made to analyse the function of the complex of marginal spines and zigzag deflections according to the principles put forward by Rudwick (1964) (with minor variations). An examination of the structure of the marginal spines shows that they have been surrounded by the mantle and that the mantle border has extended along the whole or part of the spines as a closed fold (fig. 58, 60, 63, 65, 66, 67). The marginal spines which occur in Hypothyridina cuboides appear to be very different in many respects from those in the genuine Uncinulidae (fig. 68, 69). Chapter IV. Articulation. The criteria introduced by Rudwick (1959) for the distinction between strophic and non-strophic shells are critically examined and some important corrections of his statements are made. In typically non-strophic species, such as Kallirhynchia concinna the presence of a dorsal palintrope is demonstrated (fig. 71, see also fig. 72 and 76). The distinction between strophic and non-strophic shells is evidently not so clear-cut as Rudwick suggests. Contrary to the expectations most of the Uncinulidae appear to be strophic. The hinge lines are only very short (fig. 73, 74, 75). Plethorhyncha altera and P. diana, however, appear to be perfectly non-strophic. The closure of the shell posterior to the hinge axis is a matter of great morphological and systematical interest. This function is mostly accomplished by a complex of elements of which the composition may vary greatly. In Glossinulus (Glossinotoechia) latus the following elements are involved: deltidium, lateral expansions of cardinal process, delthyrial margin, outer socket ridge, hinge line, squama, glotta. (fig. 78). An attempt is made to reconstruct the epithelium in the posterior part of the shell of Sphaerirhynchia wilsoni (fig. 79). Chapter V. Phylogeny and the Classification of the Uncinulidae. An attempt is made to reconstruct the phylogenetical tree of this family on the basis of 17 characters which have been described for 24 uncinulid species studied. With the phenetic distances and the time intervals as starting points evaluations are made of the cladistic affinities between all the 24 species. This has been carried out by means of a computer. A rough estimation is made of the anagenesis on the base of the cladistic affinities and the phenetical distances. The suggested phylogenetical tree displays three main lineages which are subparallel and must have arisen after a radiation in the Upper Silurian (fig. 81). The original genus Uncinulus appears to consist of two groups of species which belong to entirely different lineages and which differ greatly in many characters. This is sufficient reason to erect the new genus Kransia (see Appendix). It is suggested that future classifications of the Uncinulidae should be more consistent with the phylogeny of this taxon. 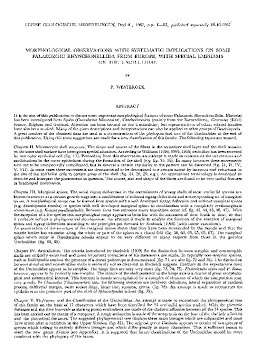