This paper deals with the sedimentary structures and sedimentary petrography of the four lowermost formations of the Paleozoic as developed in the Northern part of the Province of León (Cantabrian Mountains, Spain). Three of the four formations have a detrital character, and one consists of dolomites and limestones. Mineralogically, the detrital formations are mature. Consequently the differences are small, but diagnostic. The source rocks will have been non-sedimentary. The Herreria Sandstone Formation is the oldest formation. Only its upper 200 metres are described here. This part consists of medium-grained quartzites with intercalations of shales, coarse quartzites, and conglomeratic beds. The detrital quartzes contain various kinds of inclusions and are often composite. Microcline, the common feldspar, is often kaolinized. Both minerals are secondarily enlarged. The source of the secondary quartz is duscussed; this quartz is held to have been supplied partially, and precipitated, form formational waters. The latter have the tendency to increase salinity, which lowers the silica solubility. The layers show predominantly a parallel lamination, but cross-lamination occurs as well. In two parts of the sequence the layers are wedge-shaped. The depositional environment is assumed to have been shallow, near the shore, with fluviatile influences. The Laucara Dolomite Formation can be subdivided into Dolomite s.l. and Griotte. The Lancara Dolomite s.l. contains dolomites, limestones, oolitic limestones, and breccias. The diagenetic process of grain growth transformed the original detrital texture of the limestones and dolomites. Dolomitization is assumed to have been postdepositional. Recrystallization due to mechanical stresses occurs as well. The oolitic limestones too are built up of various types of calcite in a textural sense. The time-relations between these types is discussed. These limestones contain authigenic quartzes, indicating high salinity of the environment. The Lancara Griotte consists of nodular limestones and shale layers with limestone nodules. The limestones are detrital in origin. The origin of the griotte is discussed: it is attributed to solutional processes. The depositional environment of the Lancara Dolomites s.l. is thought to be comparable to the recent Bahama Bank deposits. That of the Griotte is less distinct, but must have been shallow neritic. The red colour of the griotte may point to a warm, humid climate. The Oville Sandstone Formation is characterized by its clayey nature, high lime content, and the authigenic mineral glauconite. The micas show replacement by carbonates, a relatively unknown process. The origin and source of the glauconite is dealt with: cryptocrystalline aggregates are thought to have initially been clay, while the crystalline glauconites are altered micas. Of special interest are the slump structures. Since they are the result of a thixotropic behaviour of the sediments some rheological principles are briefly reviewed. It is also stated that internal slumping and convolute laminations are related in the sense that both are expressions of a false-body thixotropic state of the sediment. Such a state is to be expected within a certain range of moisture content: internal slumping occurs at the lowest values, convolute lamination at the highest values of the range. However, convolute lamination is observed more commonly in turbidity deposits because such deposits settle at higher rates than other sediments, consequently their moisture contents must have been higher. In this thin-bedded complex, parallel lamination dominates but small-scale cross-lamination is also present. Other sedimentary structures observed are load casts, pseudo-nodules and “Linsen” structures. The depositional environment is held to have been deltaic i.e. the formation represents a chain of deltas. The Barrios Quartzite Formation consists of quartzites with few shale beds and locally a conglomerate. The quartzes are limpid and do not contain inclusions. Composite grains are scarce. Feldspars are not kaolinized, only sericitized. The occurrence of the mica phengite is diagnostic. Most of the beds are wedge-shaped, which gives the formation a special appearance. Most beds have an slightly inclined lamination. Like the Oville deposits the Barrios sands are held to be deposits of a deltaic environment. 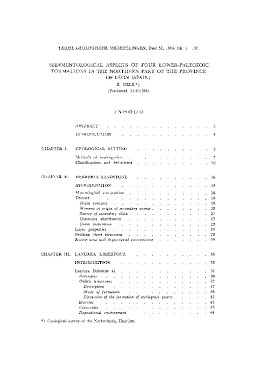