The present area covers a part of the axial zone of the Hesperian Massif. Rocks of metamorphic and intrusive origin occur in three structural units: the central zone (which in fact forms part of what is called the “blastomylonitic graben”), the migmatic complex and the rocks in the S and SW. During the Hercynian orogeny these units were placed in juxtaposition. With respect to their age and composition the rocks can be subdivided into pre-Hercynian metasediments, metabasic rocks and orthogneisses, and Hercynian migmatites, palingenic granites and intrusive granodiorites, granites, pegmatites, aplites, quartz veins, granite porphyries, lamprophyres and olivine dolerites. Based on penological evidence, the geological history can be reconstructed as follows: Pre-Hercynian metasediments, bearing traces of a probably Precambrian deformation and metamorphism (resorbed staurolites and garnets enclosed in Hercynian metamorphic minerals) have intruded along fundamental N-S trending faults in the Upper Ordovician (460-430 x 106 years ago) by means of megacrystal-bearing two-mica granites, biotite granites and peralkaline granites. The intrusion of a basic dyke-swarm took place between the emplacements of the latter two types of granite series. During the Hercynian orogeny the pre-Hercynian rocks were at first penetratively deformed; the metasediments were (re)- folded and the granites were phyllonitized into coarse-grained augengneisses or mylonitized into granite mylonites (central zone). This Hercynian main phase deformation was followed by a period of Abukuma-type plutonometamorphism. A widespread metablastic recrystallization of the non-migmatic rocks of the central zone is characteristic. The metamorphic mineral assemblages in the non-migmatic rocks of the central zone are indicative of the cordierite-amphibolite facies and the mineral assemblages of the metasedimentary rocks in the SW and W indicate greenschist facies conditions, while the inclusions in the palingenic two-mica granite suffered superimposed hornblende-hornfels facies conditions. At deeper levels the Hercynian metamorphism culminated in anatexis. During a short period of tension and normal faulting the non-migmatic rocks of the central zone were brought into juxtaposition with the migmatites. More or less synchronously the active fundamental faults, separating the central zone from the western migmatites facilitated the rise of large amounts of granodioritic magma; immediately afterwards the ultimate products of anatexis, in as much as they were capable of intrusion, penetrated the migmatic complex and the granodiorites in the form of successive phases of two-mica granites. This period of plutonic activity was interrupted by the second and third Hercynian deformations that were only locally of a penetrative nature. The majority of the Hercynian granites and granodiorites were weakly foliated during the second deformation while the third deformation locally phyllonitized and mylonitized the rocks in the N, SW and W. The Hercynian orogenic cycle was concluded with the intrusion of a post-kinematic two-mica granite, two biotite granites (280 ± 11 X 106 years ago), some granite porphyries and lamprophyres. The few olivine dolerite dykes are probably younger. Accessory zircon occurring in metasediments, orthogneisses, migmatites and granites has been investigated for crystal habit, growth phenomena, inclusions, resorption, fluorescence and other properties. The various rock-types contain zircon populations with a more or less typical habit: i.e. a combination of the forms {101}, {100} and /or {110} and sometimes {301} and {201} for the zircons of the blastomylonitic orthogneisses, the post-kinematic granites and granite porphyries, while a combination of {101}, {211} and {100} and/or {110} is characteristic for the pre-Hercynian coarse-grained augengneisses and the Hercynian megacrystal-bearing granodiorites and two-mica granites. The zircons in the rocks belonging to the megacrystal-bearing granodiorite series clearly show differences in evolution. The zircons in the migmatic rocks indicate that conditions for anatexis favoured the regeneration of zircon. The fluorescence colours of the zircon crystals are yellow, orange and brown; some zircon populations also contain emerald green fluorescent crystals. A zonal variation in fluorescence colours is also present. 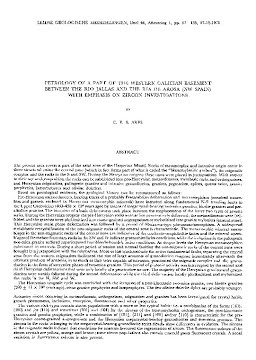