Only one eruption of the island Una-Una (Gulf of Tomini, Northern Celebes), in 1898, has been recorded in historical time; it was described in 1902 by Wichmann (l. c.) after data gathered from different witnesses. No lava flowed out, it was an ash-eruption. During that eruption large mud streams, called lahars, descended along the slope of the volcano and some broad flat-bottomed valleys were eroded (Pl. 44, fig. 4) which are known so very well from some Javanese volcanoes, especially from Mount Kelut. With the latter Una-Una shows many points of resemblance, in shape, structure and in type of the latest eruption. Along one of the large typical lahar valleys we climbed the volcanoe starting near Kololio. Fig. 6 and 7 show the higher parts of our road, typical v-shaped valleys, a product of ordinary water erosion. When seeing such lahar valleys one may presume that the volcano must contain or at least must have contained either a huge crater lake or a filling of loose, sandy, brecciated material strongly impregnated with water. Up to this moment all lava’s, pumice, tuffs and ashes, collected in the island Una-Una are andesitic. The andesite and the andesitic tuffs often show inclusions of carbonated peridotite. It is not impossible that also sediments occur on the island — though on our single trip we did not find them — thus in general structure Una-Una shows some resemblance to the other Togian islands, where, however, the volcanism is now extinct. The crater of the volcano has a diameter of about two kilometers. The textfigure 2 shows a schematic section, a being the western craterrim; b the bottom, consisting of mud, ashes and brecciated volcanic materia] (h) deposited in the crater after the eruption of 1898, thus giving origin to the flat bottom of the caldera-shaped crater. In the central part of the crater is an elevation, c of the same material but strongly metamorphosed by the activity of many solfatara’s which break through it. The author thinks that the elevation and the solfatara’s both owe their origin to a lava plug (g) which after the eruption of 1898 and after the filling up of the crater has penetrated through the crater-pipe and tilted the central part of the crater-bottom, itself not reaching the surface, however, as shown in figure 2 (see also Pl. 44, fig. 5 and Pl. 46, fig. 8). Pl. 46, fig. 9 shows the same phenomenon, a detritus plug in the crater lake of the Kelut volcano, Java. Fig. 2, d is a small crater lake; e is a detritus cone; h is a schematic section through the strato-volcano. In 1901 Professor Molengraaff visited Una-Una and made a fine photograph of the crater, which he kindly gave me for publication (Pl. 46, fig. 8). The activity of solfatara’s was somewhat stronger at the time of his visit; within short intervals a little cloud of smoke escaped from Una-Una, as shown in his sketch (fig. 3). Corals are growing on the submarine slopes in separate colonies. However, no true massive coral reef has been developed, owing to the young erosion stage of this volcanic island; still too large quantities of boulders and smaller detritus material are deposited along the submarine slopes and prevent a more luxurious reef growth. 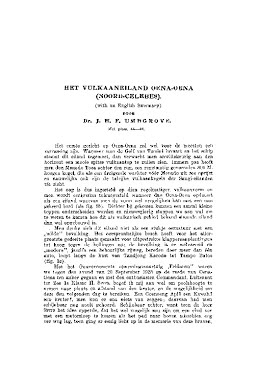