Sedimentology, paleoclimatology, and diagenesis of Post-Hercynian continental deposits in the South-Central Pyrenees, Spain

The first chapter of the post-Hercynian geologic history of the South-Central Pyrenees is recorded in a sequence of fluvial and volcanic deposits which reach a total of added maximum thicknesses of more than 2300 m and date from the Westphalian D up to and including the Lower Triassic. The present study concerns the primary lithology, paleocurrents, depositional environment, paleoclimatology, and diagenesis of these deposits. Five formations are distinguished: (5) Bunter Formation (Lower Triassic) (4) Peranera Formation (Permian) (3) Malpas Formation (Stephanian) (2) Erill Castell Volcanics (Stephanian?) (1) Aguiró Formation (Westphalian D) The deposits of the Aguiró Formation are the fills of fossil valleys forming part of a pronounced paleorelief. The formation consists largely of conglomerates deposited by braided streams. One level, near Aguiró, contains coal-bearing, tuffaceous mudstone and tuff beds, the environment of deposition corresponding to that of a back-swamp. Most clastic components, many of wich are non-calcareous phyllite grains, can be recognized as stemming from the Paleozoic basement (Axial Zone of the Pyrenees, lying to the North of Aguiró). The Erill Castell Volcanics, consisting of silicified and kaolinized andesitic tuffs and one intercalated basaltic andesite sheet, were deposited on a hilly land surface, since they locally overly fossil slope breccia and contain some fluvial channel-fills. The tuffs show evidence of penecontemporaneous pedogenesis. The Malpas Formation contains coal-bearing mudstones and shales, bedded chert, limestones, and ferroan dolomite beds (backswamp and lacustrine environments), sheets of upward-fining sandstones (the fills of mainly meandering streams), and one thick level of conglomerates (braided stream environment). The distribution of these deposits on the geological map still indicates the filling-in of a fossil valley. Nearly all the clastic components in the Malpas Formation stem from the directly underlying Erill Castell Volcanics, which had already been altered by weathering. The Peranera Formation consists of caliche-bearing red beds. Depositional features point to the lowlands bordering alluvial fans. Many of the clastic components are similar to those in the Aguiró Formation, stemming from the Paleozoic basement. The Bunter Formation, which is also composed of red beds, unconformably overlies all other deposits; its lower surface records a period of pediplanation. The Bunter sandstones consist mainly of quartz; they are the most mature in the entire sequence. The Peranera depositional environment was comparable to that of the present-day steppes, the Bunter environment to that of savannahs. All fluvial deposits show paleocurrent directions indicating flow from either the West, the North, or the East. The paleoclimate was of paramount importance for the primary lithology, depositional characteristics, and diagenesis of the deposits. Humid conditions would account for the deduced continuous flow during the deposition of the Malpas Formation and flooded back-swamps of the Aguiró and Malpas formations. In these formations, diagenetic parageneses of iron sulfides, kaolinite, and siderite, and the preservation of abundant vegetational debris, point to a weakly to strongly reducing and a neutral to acid milieu. A semi-arid climate is consistent with the intermittent flow deduced from channel-fill properties in the Peranera Formation. Flow in the Bunter channels was more continuous, but the channels dried up in the dry seasons. The instability of the vegetational debris in both formations (root traces are present but there is hardly any coalified material) points to lowered water-tables and the oxidizing conditions of sub-aerial diagenesis. In spite of the similarity represented by a greyish-red stain, the Peranera and Bunter red beds differ strongly in primary lithology and diagenesis. The clastic composition of the Peranera Formation is to a great extent unstable; in the Bunter Formation it is highly stable; ferric oxides in the Peranera sandstones were largely brought in clastically; in the Bunter sandstones they are authigenic. Diagenesis in the Peranera deposits is mainly that of precipitation of and replacement by calcite (caliche); in the Bunter deposits in situ kaolinization of muscovite, possibly early diagenetic quartz (silcrete?), and authigenesis of dolomite can be observed. These differences are probably related in part to the morphologic setting (Peranera Formation: still some relief; Bunter Formation: deposits directly overlying wide pediments), but chiefly to the paleoclimate (Peranera Formation: steppe climate; Bunter Formation: savannah climate). The composition of recent fluvial sands deriving from the Paleozoic core of the Pyrenees is treated in an Appendix. These sands are to a large extent comparable to the sandstones in the Aguiró and Peranera Formations. 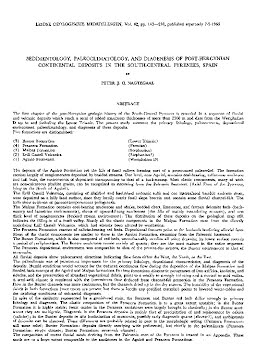