THE ICE AGE IN EUROPE especially in the Netherlands In the entrance hall a map (fig. 4) shows the largest extent of the glaciation in Europe. A model of a glacier suggests how the stones and hills shown on the photographs were transported or modelled by the ice. A stone and a buffalo’s skull have even been found deep in the soil where Amsterdam now stands. An enormous bear tells us of the animals that once braved the cold. In the first room (left of entrance hall) the tropical or subtropical life, before the Ice Age, is shown. Of the four glacial periods distinguished by the palaeontologists the first did not influence our climate. We see the animals then living here: the largest known elephant, Archidiscodon meridionalis, (fig. 2, shoulder 5 m. high), rhino, tapir, hippo, sabletoothtiger (fig. 3), hyaena, antelopes, porcupine, beavers, deer and a monkey. Many of their remains are disclosed by the water from the bottom of the Zeeland Sea-arms, others are found in the clay-pits at Tegelen, known for their pottery clay ever since Roman times. Both are sedimentations of the rivers of the first interglacial period. The plant remains are shown in a pollen diagram: the cork epidermis of the pollen is preserved in the layers deposited at a certain time (a picture shows some pollen grains highly enlarged). The diagram covering a depth of about 5 m shows the changing climate: willow (wilg) and birch (berk) belong to colder times, oak (eik) and hazel (hazelaar) point to a milder climate. The room to the right of the hall shows the animals that survived here during the cold period. The last glacial period (fig. 4) saw reindeer, musk-ox, glutton, mammoth (fig. 5), woolly rhino, giant deer, bear. Many of them have been pictured by the human inhabitants in their caves, as the reproductions on the exhibition show. The wisent (fig. 6) survived, as probably did the Przewalski horses, and others (boar, elk, deer). The next room shows the animals that inhabited our regions after the Ice age: as said some adapted themselves to the milder climate, others retired to the north or to the mountains in the wake of the retiring ice (fig. 7 shows how e.g. the habitat of the ring ouzel is thus cut into pieces). In some cases the habitat of a species had been divided by the ice, one part of the population finding a refuge in the east, another in the west. When the ice retired again, both followed it and the two parts met again. Often the two populations had by then developed into two different forms, subspecies or even species (fig. 8). Finally some human remains are shown: skulls of Neanderthal man and Cro-Magnon man as well as a modern atavism. The alternation in the climates is also shown in the shell remains, larger species during the warmer interglacial periods, smaller ones or none at all during the glacial periods. 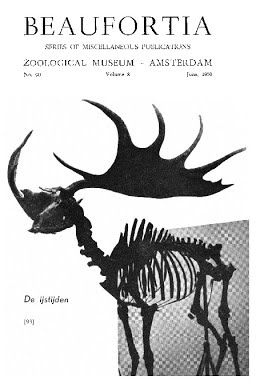