The concept of the genus Rousettus Gray, 1821 as established by Andersen (1912) is revised to accommodate R. madagascariensis Grandidier, 1929, R. obliviosus Kock, 1978 and R. spinalatus Bergmans & Hill, 1980, and to reflect the following mutations. Following Bergmans et al. (1988), the genus Boneia, Jentink, 1879 is treated as a synonym of Rousettus, which adds to that genus the species B. bidens Jentink, 1879. The subgenus Stenonycteris Andersen, 1912 is considered a synonym of Rousettus, and the subgenus Lissonycteris Andersen, 1912 a full genus, to be reviewed in the next part of this series. All African Rousettus species are characterized and their distributions, including many new records, and geographical variation are analyzed. Following Eisentraut (1960), R. egyptiacus (E. Geoffroy-St. Hilaire, 1810) is divided into four, geographically disjunct, subspecies: egyptiacus from southern Egypt northward to and along the Mediterranean coast, including Cyprus, into southern Turkey; leachii (Smith, 1829) from southern Sudan and Ethiopia through East Africa to the Cape; unicolor (Gray, 1870) from northwest Angola to the Mount Cameroun region and from there to Senegal; and the extralimital arabicus Anderson & de Winton, 1902 from the southern half of the Arabian Peninsula to southern Iran and Pakistan ( arabicus records from East Ethiopia are thought to be based on small-skulled leachii). All four subspecies are shown to vary geographically. The differences between arabicus and R. leschenaultii (Desmarest, 1820), which both inhabit Pakistan, are discussed at length. Notwithstanding several recent publications, Rousettus lanosus O. Thomas, 1906 is considered very distinct from Rousettus madagascariensis. Its scattered highland distribution has given rise to appreciable geographic variation. Three rough divisions are described but for the present no subspecies are recognized: East Zaïre, adjoining Uganda and (probably) Rwanda; (probably) West Ethiopia, South Sudan, East Uganda and Kenyan highlands; and Northeast Tanzania to Malawi. The Malawi records are the first for that country. Of R. madagascariensis, many new specimens have come to light, and its diagnosis is adapted accordingly. Its association, as a subspecies, with R. lanosus by some recent authors is based on a misinterpretation of its original description and other literature, and rejected as untenable. Its differences from R. obliviosus are described in detail for the first time. Some previously unrecorded specimens of R. obliviosus are reported. It is suggested that sexual dimorphism may be at least partly responsible for the “geographic” variation noted by Kock (1978). 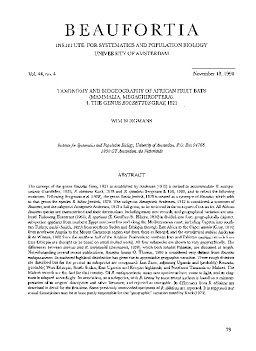