Times change, and so does the first name of our venerable old journal. However, it is with reluctance that we change the first title of Bijdragen tot de Dierkunde into its former subtitle Contributions to Zoology. Nearly one hundred and fifty years ago, in 1848, the Royal Zoological Society “Natura Artis Magistra” in Amsterdam founded its periodical with a Dutch name, proud of the contributions zoologists in the Netherlands made to science. In the early years of its existence, the Bijdragen published articles either in Dutch or in French, with proportionately twice as many contributions in Dutch. Even German-born Hermann Schlegel (1804—1884) had his contributions to the Bijdragen published in either French or Dutch. It was not until 1884 that the first articles in English and German appeared, written by the then young naturalists d’Arcy Wentworth Thompson (1860—1948) and Max Wilhelm Carl Weber (1852—1937). From then on up to 1924 German was the leading language, with English as a good second, followed by Dutch and French. However, from 1924, English took the lead (with “evergreen” articles such as Julian Sorell Huxley’s “Clines; an auxiliary method in taxonomy” in 1939), increasing in proportion up to the present 90%, while French and German decreased to about 10%. Meanwhile, contributions in Dutch were actually forbidden, one of the last being Nico Tinbergen’s classical study on the function of the red spot on the bill of the herring gull in 1949. Ever since then, the title Bijdragen tot de Dierkunde has been in fact misleading to outsiders. In the present day, international communication is flourishing and English appears to be the most widely used scientific language. To reflect this spirit, we will from now on place the English title of our journal first. However, the contents and goals of our journal, the oldest zoological periodical in The Netherlands, will essentially remain the same: we solicit for papers of high quality in any branch of zoology. As before, we will accept papers in either English, French, or German. We will continue to treat text and illustrations with the utmost care that an international, peer reviewed and often cited journal, with a citation half-life of more than ten years, deserves. However, you may have noticed a trend in the last few years with some priority given to papers with either more theoretical content, review articles, or descriptive papers of a more general interest. By doing this we want to make Contributions to Zoology of interest to a broader public. Thus we aim to increase the profile of not only the journal, but also the papers and authors who publish in it. 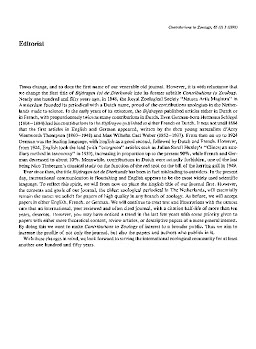