The present paper gathers the results of a morphological study on 149 specimens of Rhinolophus hipposideros, and of ecological investigations on additional material, incl. some 5,000 banded individuals of the same species. Brief description of the reproductive organs of both sexes is given. The reproductive organs of the sexually mature (adult) and the sexually immature grown-up (subadult) individuals are illustrated and comments are made on their changes during the year. In adult males, the spermatogenesis commences in spring, after the change from winter torpidity to active life, and culminates towards the end of July and in August. During the winter months (December to April), the seminiferous epithelium of the tubules of testes is resting. On the contrary, the interstitial cells of Leydig are conspicuously developed in the period from October to April (or May). The tubules of the epididymides of adult males are never entirely free of spermatozoa but they contain the lowest numbers of the latter at the period of intensive spermatogenesis. Towards the end of August and in September, the tubules of the cauda epididymidis begin to be filled with greater numbers of spermatozoa, being overcrowded with them in the period from October till April. Apart from the ampullar glands, the seminal vesicles, the prostate and the bulbourethral or Cowper’s glands, the males of R.h. possess a conspicuously developed accessory sexual gland, discovered, in Rhinolophus, by ROBIN (1881b) and termed the glandula urethralis. This gland is the greatest element of the male genital tract, being at the peak of its secretory activity in October and November. The staining properties of the secretion of this gland indicate that the urethral gland takes an important part in the origin of the female vaginal plug. Most of the adult females were found to copulate already in autumn, from late September till November. Ovulation takes place in April, still before the dissipation of the vaginal plug. Pregnancy lasts for about 2½ months; lactation, for 4 to 5 weeks. The main information on the course of estrous cycle was obtained by histological examinations of vaginal epithelium. The following is the succession of the individual phases of the estrous cycle of reproducing female R.h. in Czechoslovakia: proestrus, late August and early September; estrus, late September till early April; pregnancy, late April till first days of July; lactation, July and early August. The life of R.h. can be divided into three main periods, viz., the juvenile, subadult and adult period. The juvenile period lasts about two and a half months, from July till September. The pelage of individuals younger than some 14 months of age is grey, that of older ones being greyish brown to brown in colour. The male R.h. attain sexual maturity at an approximative age of one year and are first capable of fertilizing at the age of about 15 months, in the second autumn of their life. While the first signs of estrus appear in female R.h. already at the age of 4 months, most of them attain sexual maturity only towards the end of the second year of their life. A small percentage of females (15%, according to banding results) reproduce already at the end of the first year of their life. Although the uterus of one pregnant female R.h. was found to contain two embryos, our results indicate that the litter size equals one. The greatest longevity of R.h. in Czechoslovakia, determined by banding, is 10½ years for males and 9½ years for females. A certain percentage of adult females (6.7% of the material examined) do not reproduce. Sex ratio among the juveniles is 1 : 1 while males predominate among the subadults and, especially, adults; however, a question arises of the extent in which the sample obtained corresponds to the actual relations in the population. The paper is concluded by a discussion. The main problems arising from the study are discussed, viz., the possible hormonal regulation of the male sexual activity, the estrous condition of females, especially during hibernation (the so-called “subestrus”), and the time of attaining sexual maturity. 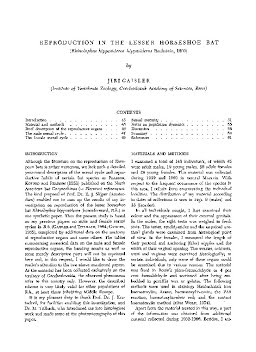