Perennial herbs, undershrubs or lianas, mostly with milky or watery juice. Leaves opposite or whorled, membranaceous, coriaceous or fleshy. Stipules wanting, very small or rudimentary. Flowers actinomorphic, usually 5-merous, rarely very large. Inflorescence consisting of extra-axillary or terminal panicles, racemes, umbels or cymes or flowers solitary. Calyx persistent, 5-lobed, the segments imbricate or separate in the bud, the tube short. Corolla sympetalous, shortly or deeply 5-fid, rotate, campanulate, infundibuliform, hypocrateriform or tubular; the segments commonly reflexed; aestivation imbricate, contorted or rarely valvate. Corona usually present, taking various forms and formed either wholly or partly by appendages to the corolla or the staminal filaments, distinct or joined to each other, membranaceous or fleshy, sometimes also joined to the corolla. Stamens 5, distinct or more usually connate around the gynaecium and adherent to the stigma; filaments short and broad and connate at their bases or throughout into a staminal column; anthers 2- or rarely 4-celled, attached by their bases to the filaments, usually united with each other and with the style to form a complex organ, the gynostemium. Pollen in tetrads, associated with 5 spoon-shaped translators, or the grains of each anther cell united in one or two waxy masses (pollinia), the latter attached by means of arm like processes (caudicles) to 5 small various shaped bodies, inserted on the style top and alternating with the anthers: the corpuscles or pollen carriers; a corpuscle and the caudicles of the adjacent anthers forming together the translator, an apparatus for the removal of the pollinia. Ovaries 2, superior; styles 2, free below but linked above by a single massive 5-lobed stigma. Ovules numerous, mostly anatropous, pendulous. Fruit a pair of follicles, or sometimes only one developing, deshiscing adaxially, the placenta becoming free as a replum. Seeds ovate, oblong or elliptic, compressed, usually appendaged by a long coma. Embryo nearly as long as the seed; cotyledons flat. Endosperm cartilaginous. About 250 genera and 2,000 species; cosmopolitan but chiefly in tropical and subtropical regions. 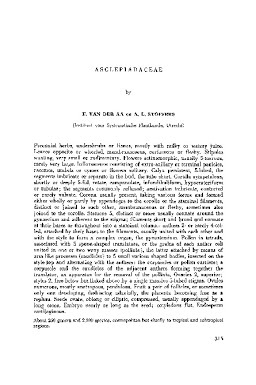