Herbs, shrubs or rarely trees; stems terete, angled or striate, often articulate. Leaves alternate or opposite, sessile or petiolate, simple and sometimes reduced to scales. Stipules present or wanting. Flowers actinomorphic, hermaphrodite or unisexual, minute, greenish, often mono- or bi-bracteate, solitary or usually in dense cymose glomerules, these spicate, axillary, paniculate or cymose, or flowers arranged in a strobile and sunken in depression of the stems. Perianth simple, sometimes wanting in the pistillate flowers, made up of (2—)5 connate tepals, usually persisting in fruit. Stamens as many as or fewer than the tepals and epitepalous, hypogynous or adnate to a disk or to the base of the perianth; filaments free; anthers 4-celled, incurved in the bud, with longitudinal dehiscence. Ovary superior or rarely inferior, uni-locular, attenuate into the style or truncate at the apex; styles 1—3, terminal, short or elongate, stigma capitate or styles 2—3, introrsely papillose or stigmas 2—5, sessile and often filiform. Ovule solitary, campylotropous, erect or suspended from the apex of an elongate funiculus. Fruit an indehiscent nut or rarely circumscissile, membranaceous, coriaceous or fleshy, usually included in the perianth and deciduous with it. Seed with a coiled embryo, surrounding the endosperm, the latter farinaceous, fleshy, or nearly wanting. About 1500 species in more than 100 genera, of world-wide distribution, often in dry and saline areas, in prairies or deserts. 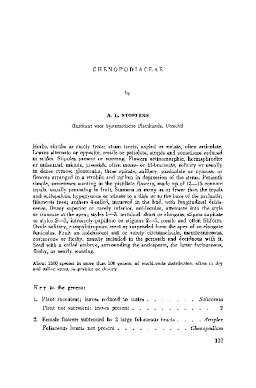