During a recent visit to the British Museum (Natural History), I found, stored away with some unsorted white-eyes, a skin, labelled as Zosterops sp., which evidently represents an undescribed race of Zosterops novaeguineae. It may be known as follows: Zosterops novaeguineae magnirostris, nov. subspec. Type: cf, January 1936, Awar, N. E. New Guinea, collected by Viscount Chaplin. Brit. Mus. reg. nr. 1936. 4. 20. 94. Measurements: Wings 54 and 54 1/2 mm respectively; culmen from skull 14 1/4 mm, exposed culmen 11 mm, culmen from anterior point of nostril 8 mm. The wings are freshly moulted and perfect, the tail is damaged. Diagnosis: Differs from all hitherto described races by its longer and heavier bill. Differs from the nominate race as well as from Z. n. crissalis, Z. n. oreophila, Z. n. wahgiensis, and Z. n. shaw-mayeri, in its smaller wing-size (for measurements of these races, cf. Mayr, 1931; Mayr & Gilliard, 1951; Mees, 1953), and from the last mentioned four races also in having darker upper parts, without yellow on forehead and supra-loral region. I have not seen the race shaw-mayeri, hitherto known from the type-specimen only, which according to its describers (Mayr & Gilliard, 1951) has the bill longer than in wahgiensis, but more slender, whereas in magnirostris the bill is long and heavy. Agrees in size and in coloration of upper parts with Z. n. wuroi and Z. n. aruensis (for measurements, cf. Mees, 1953), but besides having a larger bill, differs in its more greenish-yellow, less yellow, throat, and in having a distinct yellow streak over the centre of the abdomen. 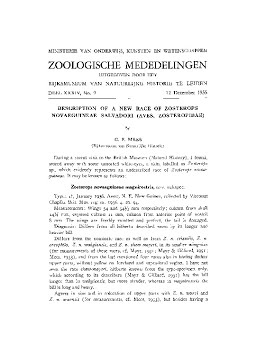