A new classification of Chelicerata

Progress in classification of Chelicerata has been thwarted especially by two factors, viz., the concept of mites as one monophyletic group, and the opinion that this group consists of species with a highly modified plan of construction and without any trace of true segmentation. The only characters which are generally shared by all groups of mites refer to the presence of a gnathosoma (i.e. the cone-shaped, movable structure comprizing the mouthparts), and the occurrence of a larva with only three pairs of legs (the last-mentioned character is also found in Ricinulei). A comparative morphological study of the gnathosoma (Van der Hammen, 1970b, 1972) has, however, demonstrated that two fundamentally different types can be distinguished, which must be the result of parallel evolution. Two groups of mites (Actinotrichida and Anactinotrichida) are now distinguished, each characterized by a great number of special characters, for instance, with reference to chaetotaxy, sternal structure, leg segmentation, respiratory organs, etc. (Van der Hammen, 1972: 275-277). In each of the two groups, very primitive, segmented representatives are known (Van der Hammen, 1966, 1969, 1970a), some of which can be characterized as living fossils and which are very important for our knowledge of primitive Chelicerata. The two groups of mites differ in their affinities with other groups of Chelicerata. Because of this, a revaluation of chelicerate affinities, and a new study of phylogeny and classification were indispensable. It might be useful to recall in this connection that, according to recent investigations by Mrs. Manton (1972, 1973) and Anderson (1973), Arthropods do not constitute a monophyletic group. On the contrary, at least three phyla should now be distinguished, viz., Crustacea, Chelicerata and 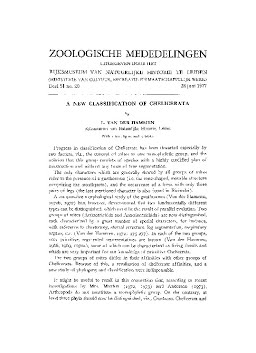