Records of cave-dwelling Lepidoptera are scarce in comparison with those in other orders of Insects, e.g., Coleoptera, of which even a whole subfamily (Silphidae, Bathysciinae) is in a most remarkable way adapted to this peculiar habitat. In the group of the so-called Microlepidoptera we could find examples of some eight species only, belonging to different families. Apparently none of them is a true cave-dweller, i. e., a permanent resident of caves and really adapted to life in total darkness. Crypsithyris spelaea Meyrick, 1908 (Tinaeidae) only has been regarded as an exception. This species has been described from a large cave in Moulmein, Burma, and originally was reported as "being practically bleached or colourless", but with normally developed eyes and wings (Meyrick, 1908, p. 399). Later on better material has been collected at the same locality, and this time the moth appeared to be not quite colourless (Meyrick, 1916, pp. 602-603). It remains uncertain, therefore, whether there is question of any adaptation to cave-life and whether this species can be regarded as an "obligate cavernicole,, insect, the more so as larvae of closely allied species of this genus have been found living in the open, in portable cases on lichens covering rocks. Furthermore we could find reference to three species of the genus Tinaea: T. antricola Meyr., 1924, and T. pyrosoma Meyr., 1924, both from Siju Caves, Assam, and T. palaechrysis Meyr., 1929, from Batu Caves, Selangor (Malaya). Of the latter was said that it "belongs to the typically unicolorous yellow group, but has probably acquired fuscous colouring as an adaptation to cave life; it may therefore be a true cave-dweller, possibly restricted to these particular caves" (Meyrick, 1929, p. 375). Afterwards, however, Dam- 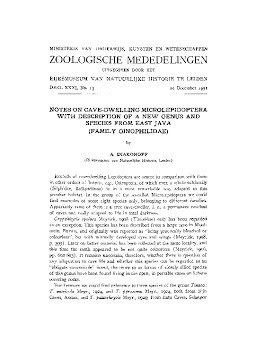