INTRODUCTION The fossil remains of Hippopotamus from the Pleistocene "Elandsfontein" site near Hopefield, Cape Province, have already been briefly described by Singer and Keen (1955), who found that the material available at the time was not different from the living Hippopotamus amphibius L. However, it seems worthwhile to review their status since the Hippopotamus material has been considerably increased as a result of recent collecting trips to the site. Not only are there now cranial remains, but also postcranial material, notably carpals, tarsals and metapodials. The purpose of the present note is to place on record all the material at present in the Hopefield collection pertaining to the species in question. The specimens, originally housed in the Anatomy Department, University of Cape Town, have now been transferred to the South African Museum, Cape Town. The specimens' numbers refer to the Hopefield collection catalogue. Order ARTIODACTYLA Owen Family HIPPOPOTAMIDAE Gray Genus HIPPOPOTAMUS Linnaeus Hippopotamus amphibius L. subsp. DESCRIPTION OF SKULL AND DENTAL REMAINS The best preserved cranial remains of the hippopotamus in the Hopefield collection are two posterior parts of skulls, both broken off in front of the orbits (the fragments composing the first skull are numbered 1259, 1263, 1264, 4061, 5909, 5925, 5940, 5951, 5966, 5968, and 6021; the fragments of the second specimen bear the following numbers: 5903, 5904, 5908, 5911, 5913, 5914, 5915, 5917, 5919, 5920, 5921, 5923, 5932, 5933, 5935, 5939, 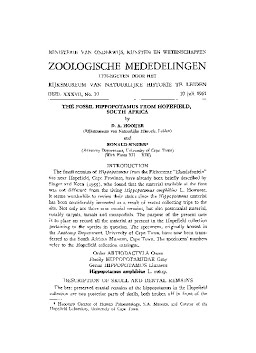