Catalogue of the Pirulidae in the Rijksmuseum van Natuurlijke Historie

Since the paper by Smith in 1894 (A list of the recent species of the genus Pirula) no monograph, review, or catalogue of the recent species of the genus Pirula has been published, as far as I am able to state. Besides the species of which our Museum possesses specimens, I have quoted again, as in my former catalogues, all the other species, as far as I could find these mentioned in literature, whilst I added the principal synonyms. After those species of which we possess material there follows a list of the specimens stating: 1) the letter which indicates specimens from the same locality and collector (donor), as far as they are kept dry; in the case of specimens preserved in spirit the number of the jar is given instead, 2) the number of specimens, 3) the locality, 4) the collector or donor. When the locality or collector (donor) is unknown, I have placed instead a question mark. I am greatly indebted to Dr. E. Leloup and especially to Dr. W. Adam for their kindness and helpfulness shown during my stay in the Musée Royal d'Histoire Naturelle de Belgique. Genus Pirula Lamarck, 1799 Pyrula Lamarck, 1822 Ficula Swainson, 1840 Sycotypus, Adams, 1853 P. dussumieri (Kiener) (?)Pyrula elongata Gray, Zool. Beechey's Voy., Moll, anim., p. 115; 1839. Pyrula Dussumieri Kiener, Icon. coq. viv., Pyrula, p. 25, N° 17, pl. 11; 1840. Pyrula Dussumieri, Deshayes, Lamarck, Anim. s. Vert., 2nd ed., vol. 9, p. 521, 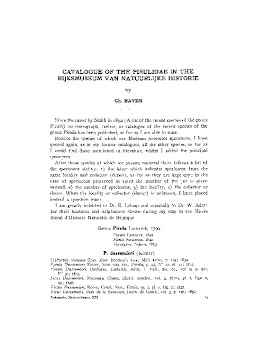