In the course of my investigations in the field of comparative acarid morphology (Van der Hammen, 1961, 1963, 1964, 1964a, 1965, 1966, 1968, 1968a, 1968b, 1968c, 1969, 1969a, 1970, 1970a, 1970b), I have paid attention to various groups of mites, viz., all orders of Anactinotrichida, except Ixodida (apart from a small paper on the palp) ; and all orders of Actinotrichida, except Tarsonemida and Acaridida. One of the most important gaps is now constituted by the Tarsonemida, of which the systematic position has been controversial, although recent authors generally classified the group with the Trombidiformes or Prostigmata. Published data on the morphology, notwithstanding the fact that very important studies have recently appeared (e.g. Beer, 1954; Cross, 1965; Karafiat, 1959; Krczal, 1959; Schaarschmidt, 1959 ; Suski, 1966, 1967, 1968), are difficult to compare with data known from other groups of mites. It is evident that, in view of the need of a satisfactory classification and a complete morphology of the mites, a reinvestigation of the Tarsonemida, with special attention to homologies, now has some priority. The present paper is my first orientation in the group. I have simply chosen a species of which I had numerous materials. In many characters, this species appeared to be an average representative. It will be important to return to the group for the study of a more primitive species (e.g. a species of Pyemotidae). This study, however, must form part of my program of continued morphological investigation. The group of the Tarsonemida (generally named Tarsonemini or Heterostigmata) consists of the families Pyemotidae, Scutacaridae, Tansonemidae, and Podapolipidae. Originally, several authors recognized relationships of the 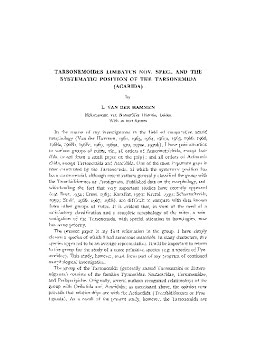