The Lycosidae and Pisauridae (Araneae) of the Netherlands

INTRODUCTION In this paper the species of spiders belonging to the families Lycosidae and Pisauridae, known from the Netherlands, are described and figured. In addition a number of species, which possibly may occur in the Netherlands though they have not yet been found here hitherto, are mentioned in the keys. In order to make the keys useful also for identifying immature specimens, I have based these keys not only on the well-known differential characters in the adult sexual organs, but also, as far as possible, on characters derived from colour-pattern and chaetotaxy. The system of notation, used to indicate the situation of the spines on palps and legs, is briefly stated as follows (Wiebes, 1956, pp. 408, 409) : d, 1', 1", v', and v" indicate dorsal, prolateral, retrolateral, anterior ventral, and posterior ventral rows of spines respectively. The indices 1, 2, and a refer to the situation of the verticils on the parts of the legs concerned, 1 is the most basal verticil, a the apical one. Distinct verticils are placed in square brackets, pairs (consisting of an anterior and a posterior spine) in round brackets. Some parts of the joints sometimes bear two spines instead of the normal one; the notation is then with extra indices, a, b, or, in the apical verticil, with the additions, s (superior), or i (inferior). The figures in this paper were made with the aid of a camera lucida. In order to figure the female epigynes, these chitinous plates were taken out, and cleared in a 10 % solution of caustic potash in water. Temporary preparations were made in alcohol (70 %), and the outlines were drawn as seen under an ordinary microscope. 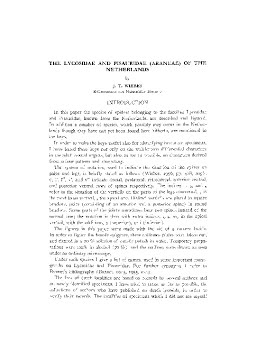