The present study deals with polyphase deformed and metamorphosed basic rocks from the Blastomylonitic Graben. The Blastomylonitic Graben is one of a number of meso- to catazonal complexes of probably Precambrian age in north-western Spain and northern Portugal. The results of the present study are obtained by application of the following methods: optical-mineralogical research, electronprobe microanalysis, X-ray powder diffraction and chemical whole-rock analysis. It is stated that the metabasites are originally of one, mainly bi-mineralic, rock type, altered by polymetamorphism. The successive phases of metamorphosis and deformation are differently developed locally and belong to two orogenies. The protolith was a rock, in which granoblastic clinopyroxene is intergrown with garnet, white mica, zoisite, kyanite, and quartz. Particularly the amount of white mica, zoisite, kyanite, and quartz is strongly varying in streaks parallel to the general foliation of the rock. The result is a variety of eclogitic and garnetamphibolitic rocks as we find them in small lens-like bodies in the Blastomylonitic Graben. The true eclogite forms only a small part of the volume of the boudins and conformable interstratified bands of restricted size or the more isometric bodies of larger dimension (i.e. near Bainas). Two types of garnet appear to occur in the examined metabasites. Firstly a zoned garnet with — from core to rim — increasing Mg, decreasing Ca, varying Fe and rather constant Mn. The garnets are higher in grossular and lower in almandine and pyrope components as compared with the second type, while their spessartine content is always low. Reverse zoning of Mn near the rim is frequently observed. The second type of garnet is not zoned or hardly so, merely variable in composition. Some order exists within the mutual relation between Ca and Fe: Ca-rich correlates with poor in Mg and Fe. It is suggested that the formation of atoll-type garnets and not or hardly zoned garnets with irregular variations in composition is indicative of a special event in the course of the prograde metamorphism. The clinopyroxene can be differentiated into an older, granoblastic type, and a younger, porphyroblastic one. The former determines mainly the rock foliation. The latter type is late- or post-kinematic (F1). A zonal structure of omphacite has not been proved. Apart from the crystallographically different pyroxenes, two groups of clinopyroxenes can be distinguished optically and chemically. The total iron content in cpx11 is mainly higher than in cpx11 It is obvious that the total iron content of the bulk rock composition was determining the total iron content of the clinopyroxene that was formed. Cpx1- and cpx11-bearing metabasites define a magmatic differentiation trend. The spreading of the plots of the metabasites in an AFM-diagram emphasizes the early to middle stage differentiates, i.e. a tholeiitic to alkali-basaltic character and a differentiation trend with decreasing mg. With regard to the facies of the high-pressure metamorphism: on the basis of Ca-, Mg- and Fe-partitioning in coexisting garnet rim - .clinopyroxene pairs, temperature and pressure, prevailing during the culmination of the prograde metamorphism, can be approximated (T= 585-625°C and P= 13-16 kb). The geothermal gradient than should average at ll°C/km, which agrees very well with the formation of the group C-eclogites of Coleman et al. (1965). Eclogite-amphiboles, i.e. barroisitic hornblendes, are paragenetically related to the critical eclogite-minerals omphacite and pyrope-almandine garnet. A second type of amphiboles, more tschermakitic in composition, is contemporaneous with the stable association albite-epidote. Whereas the former amphibole was formed under higher-pressure conditions, the pressure did not play an important role in the amphibole-epidote-albite paragenesis. A scheme (Table 8) is established in which mineral equilibria during successive metamorphic anddeformative phases may be distinguished. Zoisite is syngenetic with the syn-kinematic (F2) porphyroblastesis of barroisitic hornblende. The F4-deformation coincides partly with the stable association of blue-green amphibole, albite, and epidote. The impression is gained that the albite-poikiloblastesis took place in the less deformed parts of the eclogitic rock as far as it is syn-kinematic. The formation of boudin-like textures coincides with the development of the albite-amphibole symplectite. The main quartz-veining phase coincides more or less with the uralitisation of the pyroxene. Uralitisation, instability of the garnet, quartz veining, ilmenite formation and magnetite emplacement on cleavages in the garnets point to conditions of deformation (Fs) under a lower pressure. 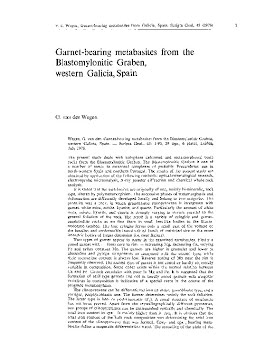