The locomotory behaviour and functional morphology of English populations of a small (<2 cm long), burrowing athenarian sea anemone, Nematostella vectensis Stephenson, 1935 (= N. pellucida Crowell, 1946), which lives in soft mud in salt marshes and creeks, are described. Objectives were to ascertain the specific stimuli and environmental conditions determining when and how locomotion is employed, and to assess survival values. Experimentation and anatomical examination revealed how anemones move, and their functional morphology was interpreted in a physiological context. Finally, locomotion, morphology and habitat were compared for several athenarian anemones, to ascertain what correlations there are, if any. Essential environmental conditions for N. vectensis are: thixotropic mud of median particle size about 30 μm; a well defined oxidizing layer at the mud surface; and well oxygenated water overlying the mud. N. vectensis cannot burrow in sand. The ability to burrow in fine mud is the primary requirement for survival, providing a stable substrate for protection, feeding and reproduction. Anemones are forced to vacate their burrows if oxygen tension in the mud becomes lowered. Rarely, individuals adhere to underwater vegetation, which they reach by climbing. Locomotion in N. vectensis comprises burrowing of two types (penetrative and intrasubstrate), creeping and climbing. Penetrative burrowing, creeping or climbing (the animal progressing physa first), are all facilitated by the complementary deployment of direct peristaltic muscular waves passing down the column and the adhesive properties of the rugae on the column. If the anemone is lying on mud, penetrative burrowing ensues; if on an impenetrable surface, creeping or climbing ensues; these behaviours are not affected by light. At 21°C, in anemones 3-10 mm long, peristaltic waves are initiated about every 54 s at the mid-level of the actinopharynx. Waves progress to the tip of the physa at a mean speed of about 37 μm s-1, with an observed range of 18-77 μm s-1, unaffected by light intensity, and are directly correlated with anemone length, at least in the range 2-10 mm. Creeping is random in direction, whether in uniform light or dark conditions; daylight or darkness have no influence on speed of progression; and no phototactic response to unidirectional light is demonstrable. Climbing is not a geotaxis; initiation and passage of peristaltic waves are not responses to gravity or tactile stimuli; and flexion of the physa towards the substrate is neither a geotactic nor a tactile response. Physal flexion depends solely on ruga adhesion. If anemones established in their burrows become covered with a thin layer of mud, they extend the column until the tentacles reach the new surface. If, however, they are engulfed in deep mud, they employ intrasubstrate burrowing towards the mud surface, moving tentacles-first with alternate introversion and eversion of the scapus, sometimes aided by reversed peristaltic waves. Intrasubstrate burrowing may be a negative geotaxis, but chemotaxis was not tested for. During head-first movement below the mud surface, ciliary action on the oral disk and tentacles assists progress by increasing the fluidity of the thixotropic mud. N. vectensis is one of only two anemone species known to employ two methods of burrowing, and is unique in using them in the same kind of substrate, although in different circum stances. Burrowing behaviour in different species of athenarian anemone is extremely diverse, but there is no consistent association between modes of burrowing, types of substrate, musculature and familial relationships, at least when based upon the limited data available for only four athenarian families, the Edwardsiidae, Halcampidae, Halcampoididae and Haloclavidae. Hence, what these data on burrowing might tell us about adaptive evolution in athenarian sea anemones is still far from clear. 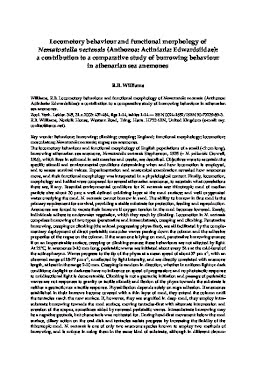