The molluscs of the brackish waters in the Netherlands (Mollusca) The Netherlands is a river delta rich in brackish waters. The organisms in these waters need to be adapted to extreme conditions, especially large fluctuations in chlorinity. However, several species occur optimally in this habitat. In this paper a review is presented of the molluscs living in brackish waters in the Netherlands. All available data from literature, collections, literature and databanks were compiled for this cause. In The Netherlands a large variety of brackish waters can be found, like lakes, canals, old creeks, shallow pools, lagoons, estuaries and dykes. This paper focusses on the waters on the landside of the dikes. All species found in these waters are treated here. From brackish waters which are in open connection with the sea only the true brackish water species are mentioned. In table 3 the species are listed which can be found in brackish waters in The Netherlands. A small group of species can be called characteristic of this habitat: Hydrobia acuta, Hydrobia ventrosa, Heleobia stagnorum, Corambe obscura, Mytilopsis leucophaeata, Cerastoderma glaucum, Littorina saxatilis tenebrosa, Tenellia adspersa. Most other species of brackish waters have a marine origin and prefer higher chlorinities. Many of them live in the Lake Grevelingen, a big lake without tidal influence in the southwestern part of the Netherlands. Mytilopsis leucophaeata prefers water with a chlorinity between 0,5 and 5‰. A small group of species, like Theodoxus fluviatilis, Potamopyrgus antipodarum, Mercuria confusa and Radix ovata, enter the brackish areas from freshwater environments. In the subsoil of the western part of the Netherlands brackish water molluscs from tens to thousands of years old can be found (fig. 1). These faunas consist of great quantities of Hydrobia ventrosa, Littorina saxatilis tenebrosa and Cerastoderma glaucum. Not so common, but often present, are Hydrobia ulvae, Hydrobia acuta, Scrobicularia plana, Macoma balthica and Mytilus edulis. Rare are Abra tenuis, Rissoa membranacea, Heleobia stagnorum, Retusa obtusa and Onoba aculeus. After circa 1600 Mya arenaria is present. Mytilopsis leucophaeata is introduced in Europa from 1835 (Antwerpen harbour), and so it is never found fossil. In the last century three species characteristic for brackish waters became extinct in the Netherlands: Corambe obscura, Lacuna vincta and Rissoa membranacea. The information is summarized per species. In the distribution maps all records of the characteristic brackish water species are shown. For the marine species only records of the landside of the dike are included on the maps and for freshwater species only the records in brackish waters are shown. In a separate chapter the mollusc fauna is summarized per area. Within these areas well known sites of brackish water molluscs are indicated (figure 19-21). Many natural brackish waters have been destroyed by human activities. However, many of the sites with brackish waters are now created and maintained by man. A natural transition from freshwater to saltwater (sea) is only present in the estuaries of the Eems-Dollard and the Wester- Schelde, and in some creeks in saltwater marshes along dune areas. The fauna in these areas is poor because of the very strong fluctuations in salinity. Brackish waters are one of the most threatened habitats of Europe and they deserve a high level of protection. Where possible new brackish waters should be created. 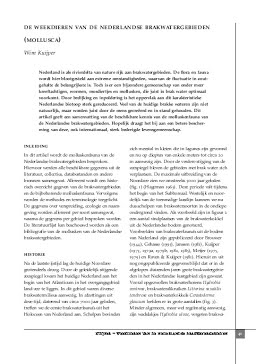